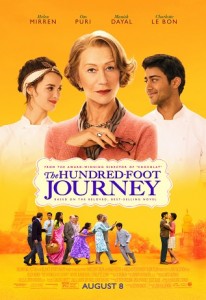 This movie is filmed extremely well and I expect the cinematographer to get a nomination for an Oscar for such a well thought out look.  I believe that the actors from Mirren to Dayal are interesting to watch and they all carry some sort of change through the picture.  The script however still needed work which lead to some poor directorial choices.  The weakest part of the script and the directing was establishing a rivalry between the younger love interests in the movie played by Dayal and La Bon.  I believed they had chemistry but did not believe the competitive nature that was forced with the script. Overall this movie about fitting-in in a new place and making a home where ever your family is is a pleasant and good feeling movie.  It gave me the sense of ahh.  You know that feeling when you are inspired but don’t know what you are inspired to do…well that was my feeling.  I look forward to seeing Dayal in more things and also that new comer Mirren.